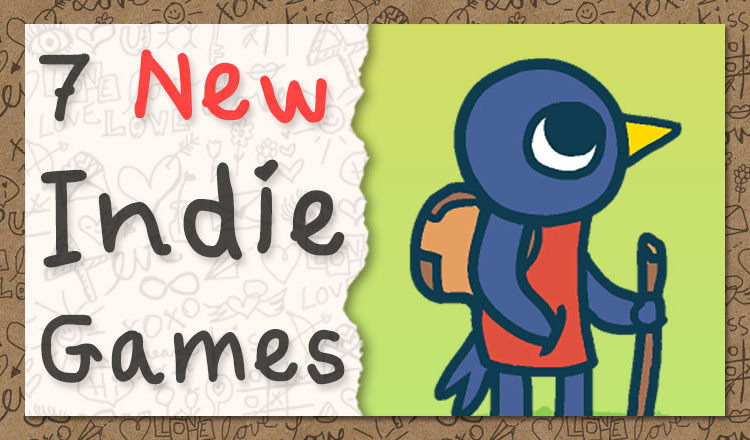 And what about the fifth and final week of July? Well, our latest collection of newly released indie games from that very week can be found... below!

We finally did it, everybody! We finally thwarted the hex bestowed upon the world by that mean space-faring wizard from Andromeda, who cursed us all to living through the month he called 'July'! He said we would never make it to August without some sort of miracle, and while it's not really clear how the curse was lifted, we've ended up in August. Somehow. Phew, glad that that's over with!

July wasn't all bad, however, thanks to the arrival of a wonderful assortment of excellent indie games over the course of the month, with the likes of Sea of Solitude, Blazing Chrome, Eagle Island, Etherborn, Sky, and Songbird Symphony headlining the release list.

There were even more indie game releases to enjoy, too, like this batch from the first week of July, this collection from the second week, this haul stolen from the third week of the month, and this other list from the fourth week.

And what about the fifth and final week of July? Well, our latest collection of newly released indie games from that very week can be found... below!

Here are the indie games
featured in our latest curated collection.

♥
» Steam || Itch.io || Twitter «
"Hike, climb, and soar through the peaceful mountainside landscapes of Hawk Peak Provincial Park as you make your way to the summit."

♥
» Steam || Main Site || Twitter «
"Immerse yourself in a unique hand drawn short adventure game and help Copperbell defeat the demon that has settled in the nearby forest."

♥
» Steam || Main Site || Twitter «
"Lightstep Chronicles is a dark sci-fi text-based adventure set on the alien vessel with an insane AI as your captor."

♥
» Steam || Humble Store || Twitter «
"Crew a submarine with friends in We Need To Go Deeper - a 2-4-player cooperative submarine roguelike set in a Verne-inspired undersea universe."

♥
» Steam || || Main Site || Twitter «
"A classic western RPG inspired by the games from the 90s. Light, fairy tale, epic, heroic, slightly humorous and without the need of endless grind to progress."

♥
» Steam || PS4 || Xbox One || Twitter «
"The Blackout Club is a first-person co-op horror game centered around a group of teenage friends investigating a monstrous secret beneath the skin of their small town. 1-4 players explore procedurally-generated missions against a fearsome enemy you can only see with your eyes closed."

DARK MINUTE: Kira's Adventure
Indie Game: DARK MINUTE: Kira&#039;s Adventure Can you help Kira to find answers for her questions? Take on mysterious technology in a thrilling platformer. Meet hundreds of prepared challenges, learn a great secret and discover the terrible secrets of the past and... humanity....
Take Me Away

DARK MINUTE: Kira's Adventure
Indie Game: DARK MINUTE: Kira&#039;s Adventure Can you help Kira to find answers for her questions? Take on mysterious technology in a thrilling platformer. Meet hundreds of prepared challenges, learn a great secret and discover the terrible secrets of the past and... humanity....
To Magical Places